The Goblin does not use any of the ABS wiring correct? Notice on my donor wiring runs to the brakes and wasn’t even going to take the wiring out if not needed....thanks for the assist!

Nope. Because the fronts will be on the back and it would freak out the computer and give you bad results.

ctuinstra said:
Nope. Because the fronts will be on the back and it would freak out the computer and give you bad results.
Click to expand...

I have been contemplating the anti-lock brake system from the donor car and trying to gather some information to determine if it would be possible to keep the ABS. Some of the stipulations that I have found include keeping the tires at the stock diameter (approx. 24.9 inches), having the same size/diameter tires front to rear, and keeping the same brakes as stock front and rear (rotor diameter, caliper size). Brake line diameter and length were also discussed, some stating it has an affect, others stating it does not. Since the hubs are swapped front to rear on the Goblin, the ABS signals into the controller would have to be swapped front to rear, making sure the left side to right side is not swapped and the stock brakes would need to be utilized - rotor diameter and calipers. Tire size is controllable and should not be an issue.

The mounting of the rear ABS hubs on the front uprights may be an issue with the current steering arm configuration. It has been explained the 5 bolt hubs, having the ABS connector, will hit the steering arm bolted to the back of the upright. The solution has been to grind off the connector and ensure the back of the hub is sealed. Looking at the steering arm, there is not much material to enable removal to allow the ABS connector to remain and still have enough meat in the aluminum to ensure no potential failure. A new steering arm may have to be machined to accommodate or a modification to the hub to extend the ABS connection could be made. The front ABS hub mounted in the rear does not appear to have any interference problem.

Further research is needed to determine if this could be tried on a Goblin, under controlled conditions and not on public roads, to determine feasibility. If this could be accomplished, having ABS as an option would be a good thing for some drivers and their cars.

The front hubs and rear hubs send out different wave patterns from the sensors.

Brad, the ABS system is somewhat complex having, as you indicted, separate and distinct signals coming from the front and rear hub sensors. These are further separated into left side and right side signals, through wired connections, to differentiate each corner of the vehicle as an input to the controller. The controller is expecting to see a specific wave pattern from the front versus the rear and is the obvious reason the wiring in the Goblin would need to be swapped front to back. Additionally the vehicle speed sensor input, from the transmission, must be present to feed the controller software algorithm. These 5 signals (there are some others) are then used to determine individual wheel speed and activation of the ABS function during braking. This is the highly simplified version of how the system works, but from the standpoint of making it useable in the Goblin is a matter of getting the proper signals into the controller and should - in theory - allow the ABS to operate.

As I progress into my build, once I get my kit and donor parts, I will be working on this path and provide information to the DFG forum as I lern from my mistakes and successes. If anyone else is working on this, please chime in and let us know what your experience has been.

I agree with your assessment the issue I could not resolve in my head was how to reprogram the control unit. As it is set to release braking effort based on wheel wheel is locking up under load. That is to say the amount of control may be programmed differently front to rear and since the weight distributions will be different during dynamic braking than the control is setup for. I am sure it is doable just questions.
I have put about 5000 miles on mine and have not seen the need for abs yet, However do not drive it in the rain. Also my car has Wilwood calipers all round with a good balance of piston bore sizes. Do not lock up one before the other front or rear left or right.

Agreed the big factor may be the difference in weight between a Cobalt and the Goblin. I am certain the vehicle weight is a big factor within the algorithm that controls the ABS. Since the weight bias in the Goblin is 60%+ in the rear it could have a significant effect on the function of the ABS.
The idea of being able to reprogram, if the correct lines of software code can be identified, may be the only viable solution. I have not found any information about this (yet), I am sure it is cited somewhere out on the web.

Alternatively the weight factor may not have as much affect on control of the ABS if the software prioritizes the individual wheel speed and lockup event over the weight and shift of weight during a braking maneuver. This is the priority logic in aircraft ABS, since the weight bias and shift of weight is highly variable in an aircraft. Not sure how much of this logic may have been transferred into automotive - if at all.

It may come down to experimentation with the ABS system to determine if the current program will accommodate the reverse weight bias and positioning of the sensors in the Goblin.

An interesting item that I just ran across is the function of traction control (ECS) and interaction with the ABS. The ECS changes the brake bias based on vehicle speed, direction of travel (forward, sideway, backwards), and acceleration/braking input. Since the last 2 model years of Cobalt SS had the ECS system, it is possible the ECS programming may be able to automatically compensate for the rear weight bias of the Goblin. Again, it comes down to experimentation with a car and having the ABS (and ECS) hooked up and active.

You could always get a racing ABS system that is programmable.

Big $$$ and only one source - Tuner Motorsports. Not feasible.
B

Desert Sasqwatch said:
The idea of being able to reprogram, if the correct lines of software code can be identified, may be the only viable solution. I have not found any information about this (yet), I am sure it is cited somewhere out on the web.
Click to expand...

Please don't take this the wrong way, but do you really think it's easier and cheaper to plug the EBCM into a computer, reverse engineer the code, make the appropriate code changes, recomplie the code, and flash it back on the controller? I'm with Brad on this. I don't think it can be done without reprogramming the controller. Everything about the Goblin is different versus the Cobalt. The sensors are in different locations, dimensions are totally different, etc. All of that plays a huge role in the information provided by the accelerometers.

Very curious to see what you come up with. Please keep us updated on your progress. I think a lot of people would definitely be interested in a fully functional, SAFE, ABS system for the Goblin.

I bring these ideas up, because I don't see specific information in the forum about a topic, for or against, based on actual trial and error. I'm not doing this to step on anyone's toes or to cause heated arguments among the forum members. The intent is to share our information and experiences and to get it out in the open for anyone to access so we all can help each other answer questions that some may be thinking but have not asked.

The original idea was to use the existing ABS system to see if it could work. The reason for putting this discussion out there was to see if anyone has tried this or if there is information already available why it will not work.

The discussion for reprogramming the controller was mainly talking points to see what experience or other ideas may be floating around. From a doable standpoint, yes it would be very expensive to do a reprogramming and not cost effective for probably everyone doing a Goblin build. There is very little information that I had turned up on the web, but it was worth asking.

The information from Lonny (thank you) is great knowledge to understand the dynamics of the system response, that I have not found in any of my searching the web so far. It is obvious the throttle and brake response described as the system now functions that would be highly detrimental to the controllability of the car if a front brake locks up with the addition of throttle. Based on this, it is highly likely that trying this on a Goblin would not provide positive results.

So the next time someone asks about the ABS and why the Goblin does not use it, they can be sent to this link.
B

I apologize as I misinterpreted the intent of this thread. I was under the impression from a few posts above that you were going to go this route on your build.

You are not stepping on any ones toes a lot of us have had the same thought but have been unable to fix all the details. I to insisted that I was going to adapt the abs system but derided did not have the knowledge needed.
That is not the only false trail I have tried.

Brian, no problem. As Brad stated, it seems to be a great idea at the time, but once the facts start coming in you realize that putting it into application is likely not doable without lots of $$$ and a software geek who can crack and write code. We all learn from this and getting the information out on the forum makes us all just that much smarter. It's all good. 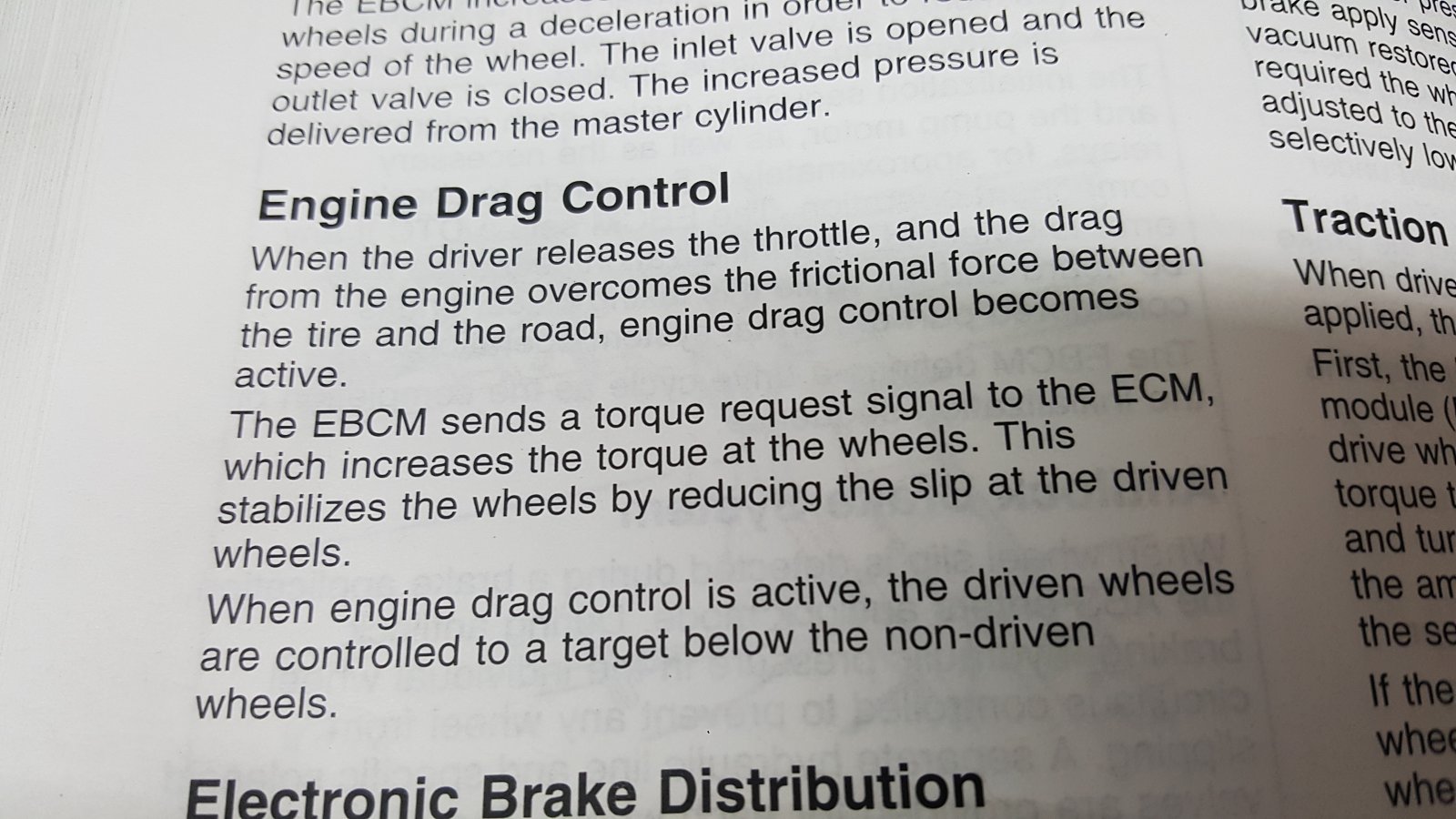 I like this conversation and think it will be useful for others in the future. I've not done any research on ABS, but surely there is a generic controller solution out there somewhere that could be adapted without having to 'decode' the GM stuff... or maybe not. As many companies as there are creating engine management and traction control solutions - it seems like there would be more options for standalone ABS.
You must log in or register to reply here.
Share:
Facebook Twitter Reddit Pinterest Tumblr WhatsApp Email Link
Top