After reading and watching the threads about IAT2 temps I started researching about water/methanol injection. On the LNF, the IAT1 comes from MAF sensor. One question I have is the IAT2 is read from the TMAP (temperature/manifold air pressure) sensor in the charge air cooler duct from the intercooler out to the throttle body , or is it read at the second TMAP sensor in the center of the intake - or both?
The reason I ask is there is a spot on the intake where there are kits to add a 5th injector. That would be a great place to add an injector for the water/meth injection. What sensor would the computer read the IAT2?
Here is a pic of and unmodified intake with a modified intake with the 5th injector and moved vacuum port. The GM stage 1 sensors utilize only 1 bolt for the sensor, freeing up an area to drill and tap for a new vacuum port.
The reason for thinking that would be a better place for a nozzle, is the ductwork before the throttle-body after the intercooler is such a mess of tight bends and such...
AND it would greatly help or eliminate the direct injection carbon buildup in the intake and heads! 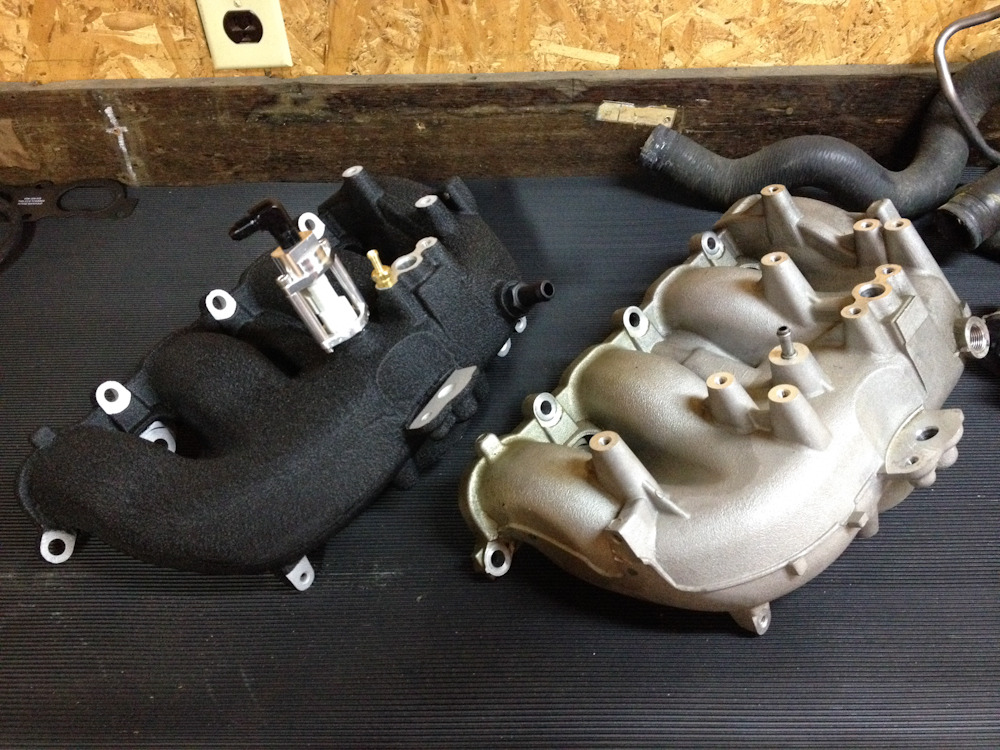 Well, let's first start with where not to place the nozzle. When placing your water injection nozzle make sure you do not place the nozzle upstream of a MAF or mass air flow sensor. Fluid running through this sensor can damage these sensors in some particular engines. Next, we recommend not installing these pre-intercooler unless you are injecting pre-blower on a supercharged engine that has an intake mounted intercooler. Injecting before front mount intercooler can cause the water-alcohol mixture to collect at the bottom, because of the restriction of the tubes. Okay, now we know where not to place the nozzle, lets get on to where to place it. 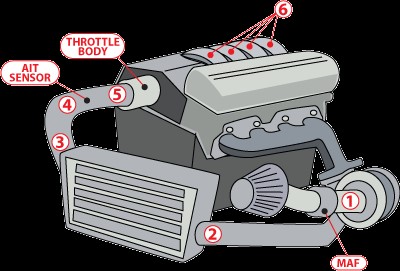 Starting from where the air enters the intake tract and ending at the intake just prior to the combustion chamber.

We don't recommend this location at all, if you do not have the proper equipment, such as, the proper nozzle, nozzle size and high pressure pump. Locating the nozzle here is the most controversial location. The majority of alcohol/water injection users do not use this location. One reason for someone to inject at this location is the water/methanol mixture chemically alters the turbo compressor map. The water/methanol injection will dynamically shift the compressor map of the turbo, so that the compressor map exhibits the characteristics of a larger turbo. This sounds great but, the main issue with pre-turbo nozzle placement is what mixture can damage the compressor blade if the mixture is not properly atomized when passing through the turbo.

In order to inject pre-turbo with out compressor damage you need a high quality low volume nozzle and high enough pressure to get the water as finely misted as possible, and the smaller nozzle which allows for smaller/finer water droplets. We recommend you mount the nozzle as close to the compresser as possible.

Pre-intercooler seems like a sensible nozzle location but, the thing to remember about this is: if the air entering the intercooler is pre-cooled, the ability of the intercooler is reduced because the temp difference is lesser. It is also possible for the fine water/alcohol mist to collect in the bottom of your intercooler core. We don't recommend this location either. The other problem is that there's a possibility that the hot air from the turbo might unnecessarily vaporize the water and take up some of the volume built up by the turbo that was supposed to be for the charge. Pre-intercooler does work for some track cars such as road racing that operate at a more constant higher RPM. For the daily driver, weekend racer, the pre-intercooler location should not be considered.

Most computer controlled engines have an intake air temperature (IAT) sensor. This sensor monitors the temperature of the air going into the motor. The reason for putting it before the IAT sensor is because it will see the cooler temps and the engine will advance timing, allowing for more power. Also placing the injection nozzle as far from the cylinders/air intake sensor as possible, it allows for the water/methanol mixture to be better absorbed into the intake air charge. This allows for great distribution to each cylinder. This post intercooler nozzle location should be the primary nozzle location to be considered for most users.

In theory, since the air charge will be mixed for a longer distance, and therefore time, allowing for the moisture to be absorbed by the air, creating the coolest possible air charge going into the cylinders. Water/methanol molecules from a nozzle located here have more time to be absorbed by the intake charge exiting the intercooler before making it into the combustion chamber.

In the cold side charge pipe is usually an easier or less intrusive nozzle location for most user's than the IC exit tank, but still the closer to IC the better. Locating the nozzle here has same advantage as the reason given above (location 3).

After the Air Intake Sensor: You can usually mount it either before or after the ‘butterfly' and still be after the air intake temperature sensor. The main difference when mounting the injector before or after the butterfly is there is less vacuum before versus after the butterfly when idling or driving in vacuum. Translation, when in vacuum, there is more vacuum after the butterfly than before it. Here is why this is important: If your solenoid is placed very far from the injectors (more than a couple of feet), then the vacuum can actually suck just a little bit of the water/methanol. This small amount of moisture ingestion during vacuum is not a problem.

This location can be the most complex area to install. Usually requiring that the intake be removed for access. Injecting here is going to yield the largest water/methanol droplets. And with the closer proximity to the combustion chambers is going to provide a larger amount of mixture into the cylinders. Doing this usually requires more fuel from the factory system be removed. This option is best for max cooling.

The water here is being injected in a manner much like port fuel injection and the bigger water molecules being injected have a more direct effect on in cylinder cooling, and altering the flame front of the combustion charge in a way much like a higher octane fuel. To take full advantage of this nozzle location it is suggested that trimming away some of the factory dumped fuel be done. In other words, in order to take advantage of the better properties of water over fuel for cooling and injecting water at this location, you want to remove the dumped fuel and actually REPLACE this with water. This injection point with a pretty sophisticated WI control method allows for the most advantageous use of water injection. The drawback for nozzles located heres is kit/component complexity, install complexity, additional labor, possible machine shop costs, and possible additional parts costs.
You must log in or register to reply here.
Share:
Facebook Twitter Reddit Pinterest Tumblr WhatsApp Email Link
Top