Some time along the last couple of weeks, while wrapping up loose ends and tuning, I seem to have gotten the car so it doesn't want to start cold and idles roughly when in open loop. Once it warms up it starts and idles fine.

Recently I did replace the fuse box with one from a non-turbo car and had to swap one of the power circuits for the cam solenoids and turbo controls to a unused automatic transmission control module power pin, both ignition power circuits. This seemed to work fine for the first few days and I didn't notice any problems.

The first time I noticed the problem was 2 weeks ago and the car actually started and ran for about a 1/4 mile, cut off and wouldn't restart. I was trying out my obd2 speedometer for the first time so I unplugged it and after a couple of cranks it fired up and ran fine the rest of the day with me working on the MAF tuning. I did plug the obd2 speedo back in for a few minutes at the end of the day and everything worked.

Labor day weekend, it took a couple of cranking cycles to start and ran rough while cold idling. I thought maybe a tune tweak had loaded bad so I backed up a couple of iterations but it didn't seem to help the idle. I had lowered the idle quite a bit from the original non stock tune, so I bumped it back up some. Of course after playing with it a few minutes it had warmed up anyway and ran fine.

This past weekend it refused to start with the obd2 speedo plugged in, cranked over fine but wouldn't fire off. Disconnected the speedo , no change. Nothing looks funny when I plug in HP Tuners, and no DTC have popped during all this time except once a general misfire when it was barely running on idle. After a few basic checks and tries it fires off and runs roughly for about 30 seconds and then again won't start. Start to go over basic checks and several more tries of starting and still doesn't fire off. For some reason I pulled the CHMSL relay (which does happen to power a circuit to the ECM), plugged it back in and the car fired right off although the idle was a little rough and actually had to crack the throttle for a few second to keep it running. Again warmed up it runs and starts fine. Probably started it twenty times that afternoon as I played with the maf tuning, setting for over an hour one time with no problems.

Last night tried to start it completely cold , no obd2 speedo and again it won't fire up. After 3-4 crank cycles I unplug the CHMSL relay and plug it back in and it fires up no problem. Cut it off and it will immediately restart.

Spent the evening looking over the wiring diagrams to see if there is anything I missed on my fuse box swap and didn't find anything. The circuit I swapped in the fuse box runs off the crank/run relay and I couldn't track down the actual control for that relay so maybe that's the problem, although I can't see how the temperature would affect it.

Is it a tune problem? Right now I'm running basically the GM Performance stage 3 tune with torque management tweaks, but no spark/cam changes, just maf adjustments that seem to be getting close to final.

Again no DTC's other than the one misfire code from it barely running at idle. I even checked that nothing is turned off other than the downstream o2 sensor and evap codes.

The cold no start, is going to be much more fun.
G

The only time I've had the misfire code has been when it was barely idling, probably at less than 500 rpm and was the P0300 code so was more than one cylinder misfiring. It does smell like it's still pumping fuel when I'm trying to start so I guess I will start with seeing if it is actually firing when it doesn't crank.

I had this issue too. Poor cold starts when in open loop.
Then I noticed that when putting the car in open loop, I had modified all the choke circuit tables.
So I went back into my open loop tune, and every table that has ECT (Engine Coolant Temp) I put back to stock all the cells colder than 111F.
Then it started great. I wait until the engine is above 130F before I gather tuning data.
Much better. 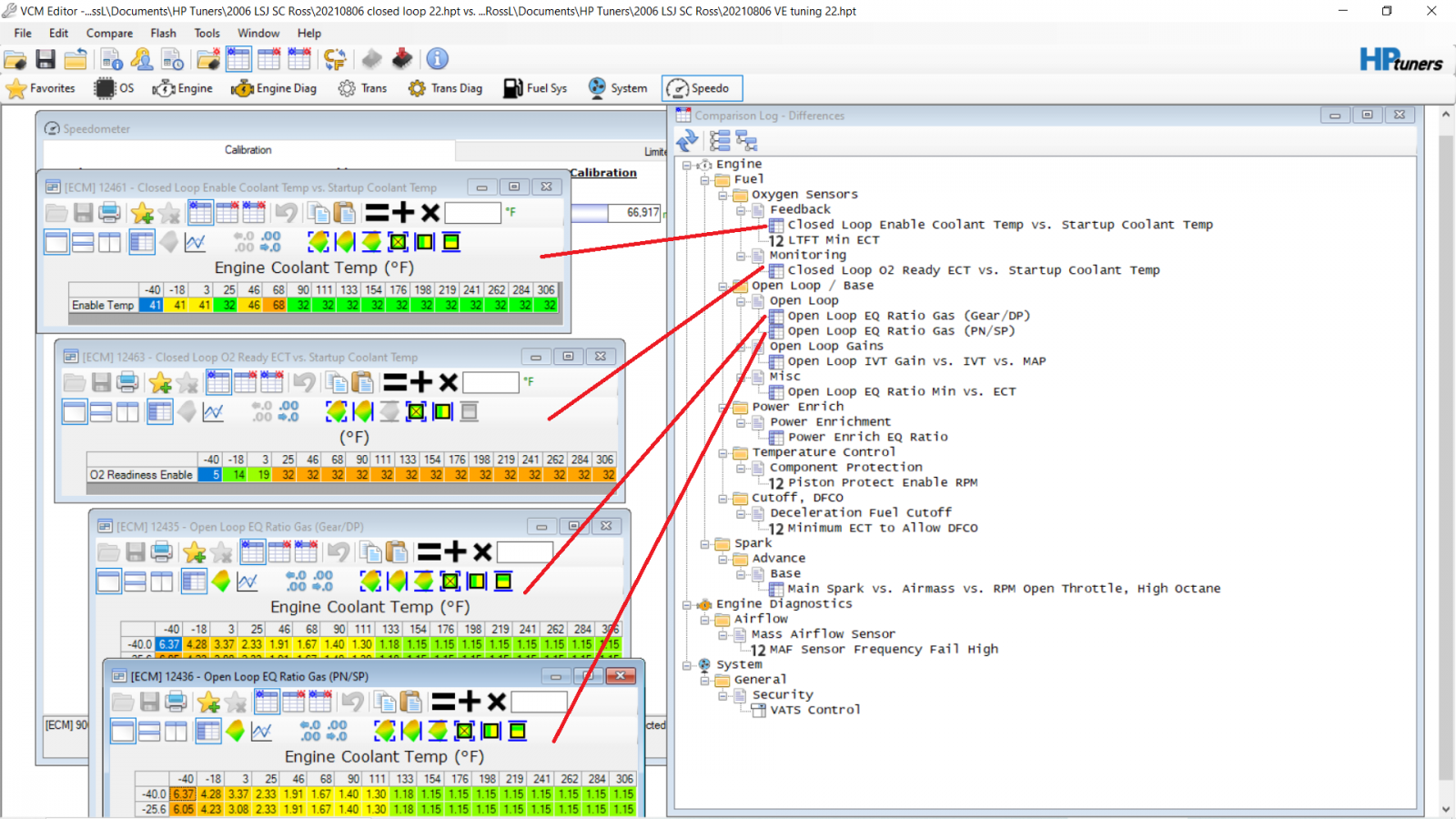 I'll look again, but I don't think I have those tables for my LNF ECM. Hopefully I just missed them. I may try changing some of the low rpm air load tables if I don't find other problems.

I did try to load in my original tune that was in the car and it didn't seem to change anything. It started fine even with the wrong map sensor data the very first time I fired it up.
Last edited: Tuesday at 10:47 AM
G

Ross said:
I had this issue too. Poor cold starts when in open loop.
Then I noticed that when putting the car in open loop, I had modified all the choke circuit tables.
So I went back into my open loop tune, and every table that has ECT (Engine Coolant Temp) I put back to stock all the cells colder than 111F.
Then it started great. I wait until the engine is above 130F before I gather tuning data.
Much better.
Check all the tables, as I only show the first 4.
Click to expand...

I don't have access to those tables for the LNF. All I have is spark adjust during cranking which is set to stock.

It turned out my pulling and reinstalling of the relay was just a coincidence, which isn't that surprising. I was able to get it to fire off a couple of times last night, and it still idled erratically. I never tried to get it to stay running until it warmed up to see if it would get to the point that it started reliably like it did Sunday. That will be my goal for tonight, to see what temperature it idles smoothly at and will restart, if I can get it to that point.

Can someone with an LNF and HP Tuners share a log with me of a start-up and idle with a pretty thorough list of parameters of anything likely to cause problems on start up? Injector pulse width and fuel pressure for fuel, spark advance, maf freq, air load and VE for air flow, cam positions, rpm, various temperature readings and anything else you think might affect start up. Unfortunately, I haven't been starting my logs previously until after I cranked the car, and usually until it had warmed up. The few times it started last night, I did log and maybe the injector pulse width was a little longer when it actually fired. It's hard to tell since it happens so fast when it actually starts. Maybe a copy of your tune would also help so I can compare your maf tuning if you aren't running a stock tune.

Beyond this, I plan to go over the basics, fuel, spark and compression. I should have a spark tester delivered tomorrow, and I'll also will check fuel pressure to confirm the electric pump pressure. I have a compression tester also so I'll check that. I will also go through the full parameter list this weekend and check the expected value with the actual with my Tech2 clone. And a full check of the grounds.

I have new LNF fuse box on order in case running some of the LNF controls on the same relay as a feed to the ECM is causing a weird feedback issue, but that will take a couple of weeks to come.

And still no DTC's that look like they could be a problem. Just the normal ones for the missing equipment.
G

So I had left the battery disconnected Tuesday night. Tried to start it last night with 2 crank cycles and nothing. Pulled the same relay as before and reinstalled and fired up first thing. I'll try tonight to give it about a 30 second pause before I try a re-crank cycle without pulling the relay.

Once I got it fired up it rough idled until it hit 120 degrees ECT (engine coolant temp) and smoothed right out. I've seen it do that at that temp before. It then fired right up every time no problem. I let it cool down to just over 120 degrees and it idled rough for about 30 seconds and then idled great. I did find a few tables that compare ect start-up temp to current temp so I may play with those a little. I've never changed them though, they are still stock.

I did some digging on the Cobalt forums and seems my problem isn't unheard of, but no real definitive fix. Usually happens while tuning but not always. I did find some discussion that the LNF doesn't actually have an open loop vs closed loop mode, that since it has a wideband o2 that it runs in closed loop from the start. Can anyone confirm that is true? If true I may have an o2 sensor that is not working right until it gets hot. I have one on order anyway so I'll see. Not sure it address the actual start-up issue, but I may have 2 different problems.

How noisy is the high pressure fuel pump? Mine makes a rattle for the first minute or so and then settles down to a steady clicking. My fuel pressure looks ok as far as I know, but I don't what it really should be. So a bump to see if anyone can send me a start-up/idle log.
You must log in or register to reply here.
Share:
Facebook Twitter Reddit Pinterest Tumblr WhatsApp Email Link
Top