This is what it would look like. You will have to use two automotive relays because of how the start system works in this car. The start command uses a 5V reference and not a 12V. Also the start command is looking for a resistor around 1.3K-1.8K in my experience. I used a 1.5K without any issues so far. Your car may be different???? The resistor is found inside of the black switch and the end of the key switch unit. The pinout referenced here are the on the connector (see photo) on the black key switch.

The ACC and the IGN/RUN will be toggle (latching) switches while the START will be a momentary push switch. To start the car, one needs to turn on the ACC and the IGN/RUN switches (I don't believe the ACC has to be on in order for it to start). The engine will or will not start according to the safety circuits of the clutch/shifter, etc.

I have not actually wired it up this way and there is always that possibility of something not as one might think, but I have successfully wired up my more advanced system using the same diagram and understanding and it's working fine.

VATS will still have to be dealt with, either by disabling it using HP tuners or keeping the key inside the black ring and taping it up under the dash. I understand certain controllers cannot have VATS disabled such as the E69, but my P12 can. 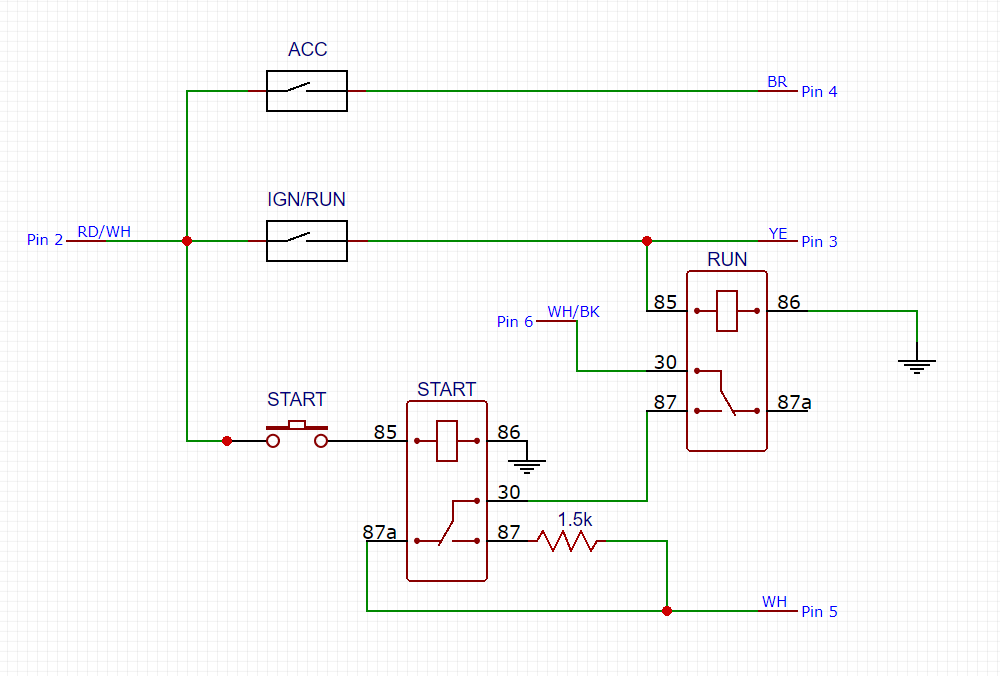 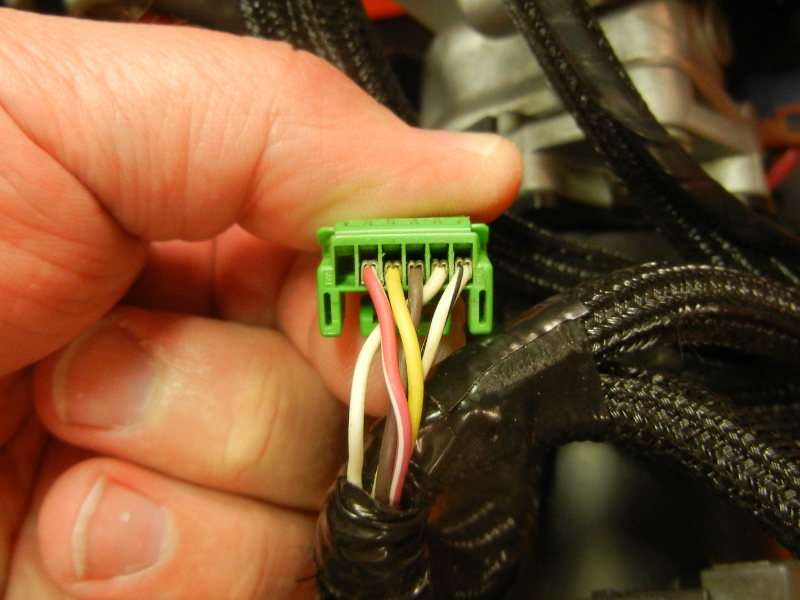 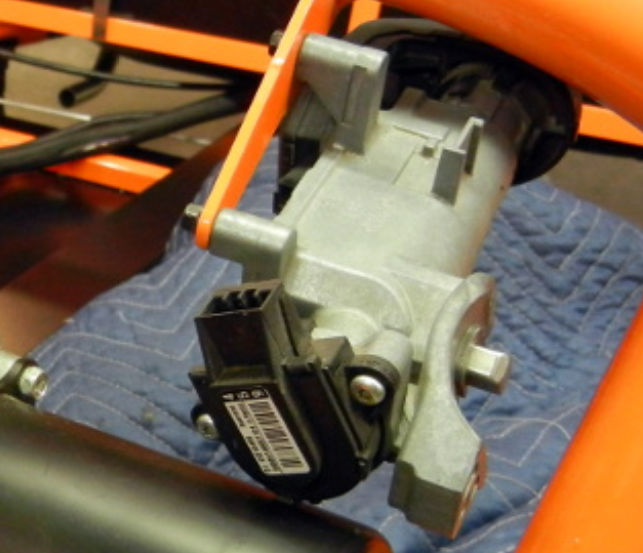 Awesome write up. Thanks!

ctuinstra said:
While working on the car today, I was surprised with what is going on with the clutch hose. I thought for sure this is the hose DF supplied, but I could be wrong. The brake fluid is actually permeating the hose! This is not condensation, it's brake fluid. I'm on the hunt for something better.View attachment 7278
Click to expand...

Use to do rear brake reservoirs deletes on our race bikes. Had to use Tygon 2375.

DCMoney said:
Use to do rear brake reservoirs deletes on our race bikes. Had to use Tygon 2375.

That's pretty cool. I wish I knew about this stuff earlier.
T

I did find a hose that is specifically made for brake lines. We’ll try it and see. I thought for sure if it’s rated for gas, that is would handle brake fluid as well. Although you are correct, brake fluid is some mean stuff!
B

So was that your typical rubber fuel line? The guy at Autozone argued with me that fuel line will work for brake fluid. He shook his head and I walked out.

Brake fluid is a vegtible oil, gas is a petrol base.

Briann1177 said:
So was that your typical rubber fuel line? The guy at Autozone argued with me that fuel line will work for brake fluid. He shook his head and I walked out.
Click to expand...

Yep. I took a quick look at it and sure enough, it's says right on it "Fuel line".

George said:
Brake fluid is a vegtible oil, gas is a petrol base.

??? You must be thinking of DOT 2 which was mineral oil. Most modern DOT 3, 4, and 5.1 are glycol-ether based. I thought about using DOT 5 in my corvette since it sits a lot but after doing more research I voted against it.
T

Briann1177 said:
So was that your typical rubber fuel line? The guy at Autozone argued with me that fuel line will work for brake fluid. He shook his head and I walked out.
Click to expand...

never trust a guy at an autoparts store lol. ESPECIALLY with fuel line, a while back i had the guy try and sell me carb line as fuel injection hose. He figured i would want it instead because "its the same and its cheaper", i told him i specifically asked for injection hose because i run 90psi of fuel pressure, if i put that on my car it would burst and i would die in a fiery crash

Took the car out today with my daughter for the shake-down cruise. This is the first time this build has hit the streets. Today was very clear, dry and cool, about 50 degrees with lots of sun. After a long winter, this is about as close to spring-like weather we have seen in a long time. The car ran great! I really had nothing to complain about. Still have a few little items here and there to take care of.

One thing that seems different is the brakes. Even though 100% of the brakes are the exact same and all of it has been taken from the previous build, the brakes now are SUPER strong! Almost too much. We may not have had all of the air out of lines before. During the bleeding this time Kaleb complained about the soft manual brake pedal. We bled the brakes multiple times and barely got any more of air out of them. Now I know why, there is no air in them. Man oh man does it take a light touch on the brakes when you first apply them! They don't really lock up on you or anything, just takes a light touch. I just can't see why anyone would need more brakes than this!

At first the push to start didn't seem like it was working because it wouldn't start the car. Come to find out the brake pedal has so much pressure built up in it that I wasn't pressing the brake enough to release the switch. Once the car was started and the pedal settled, it was fine and never caused another issue.

Filled up the car with gas and while I was there we received some attention. This guy was just falling all over himself to talk to me about the car. younger guy and appreciated the Cobalt power plant. He just thought it was the baddest thing he had ever seen. My daughter being the shy one she is just kept her helmet on.

The ride was cut somewhat short since it was only 50 degrees out and I was wearing just shorts and a sweatshirt. That cool wind and be quite chilly eventually. Still blows my mind what this thing can do....70 before you know it!!!

Sorry no pictures this post. We are finalizing the wrap design and will be wrapped soon. I'm going to hit up a local photographer that I met at the Cars and Coffee (earlier in the day of the fateful day) back in the fall of last year. He offered to photograph the car pro-bono for local interest.

George said:
On the brakes may be your brake booster
had a leak or the new one has different specs

I had forgotten that we did replace the brake booster and the MC. I was focusing on the just the brakes at the wheels. I'm going to attribute to the new brake pedal pad.

Chad, congrats on being back on the road! Excited to see the new wrap.

ctuinstra said:
We mounted it to the column tube using a 3D printed standoff. It's about 3/4" tall and matches the arc of the column and has two holes in it that align with the bracket.
Click to expand...

Any chance of getting one?

Johvans said:
Any chance of getting one?

Sure. I can print one for you.
B

How did you mount your boost and AeroForce gauges into the bracket? Hot glue doesn't seem to stick very well to my boost gauge.

Briann1177 said:
How did you mount your boost and AeroForce gauges into the bracket? Hot glue doesn't seem to stick very well to my boost gauge.
Click to expand...

We cheated once again and used the 3D printer. This is a sliced model of it. The Aeroforce gauge has a different mounting depth than the boost gauge so we had to make this. 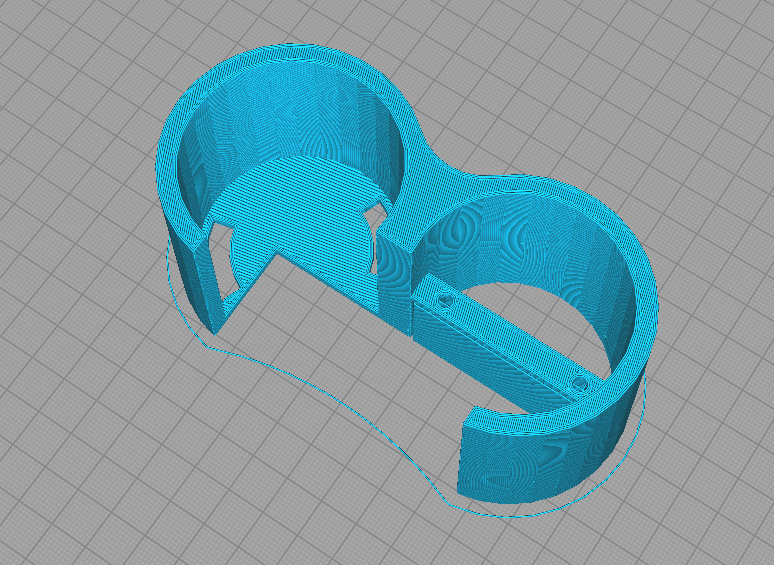 Here are the files you will need these two attached files. These are designed to work with this gauge mount.