Hi all - I'm brand new to the forum and the DF world as a whole.

From all the research I've done, I've come to the rough conclusion that the SS/SC route is going to be the way to go as it has the highest potential power output with aftermarket mods down the road. Can others confirm this for me? I'm not opposed to waiting a little longer or spending a little extra on an SS/TC donor if it is in fact a better platform to build on than the SS/SC, but wanted to get some general opinions on both.

Welcome to the forum.

Correct, the sc has a much bigger aftermarket and potential, than all others, plus there is a larger market overall. The tc has more power right off the batt and easy to make more power with just a simple tune, but will require a lot of work to go beyond that. The tc models are also harder to come by, plus come at a premium.

You can’t go wrong with either, it’s just how you want to play it.
F

Awesome thank you for the clarification. Any pointers on where I can find a donor at? I'm regularly checking Copart, CL, and Facebook Market Place, but not a whole lot of inventory it seems in terms of SS/SC.

When I was looking for mine I looked primarily on CL, marketplace and letgo/offerup. I would normally just search “cobalt”, because people fail to mention engine and trim level all the time, so other key words like “SS”, supercharger or turbocharger would get passed over.

A lot of people have luck on auction places like Copart, but I didn’t like their fees and such, So I stuck with the old school face to face stuff.

A lot of it will depend on where you live and what’s out there.

Insurance Auto Auctions is the leader in online car auctions. Used cars, trucks, vans, SUVs, and motorcycles with a clear or salvage title for sale.

Be patient and check frequently, they pop up randomly. I think Facebook algorithms don't show you every thing they could when searching marketplace see nothing one day when searching and then 3-4 pop up the next day saying they've been listed over a week.

The SC guys like to toot their horns. They have to put a turbo on them to get the big HP numbers. Go with what you want to do and enjoy your 'stock' 260HP TC.

To be fair, GM underrates these engines too. The early L61's were rated at about 145hp but actually made nearly 170hp. Considering that the car only weighs about 1500lbs, any of the available mills will do fine.

No doubt. Even a stock 2.2 is no slouch, but I wanted a good head start. I basically went for whatever was the best deal being sc or tc. The sc was much easier to come by at the price I was willing to pay, so that’s what I went with. With my current mods, I should be well within the range of a tc power and still way ahead on money.

We have a tendency to think we need >400whp in these Goblins but the truth is many people are not ready for that kind of power to weight and anything more is just a waste and/or dangerous, especially in the beginning.

My recommendation is to go SC and build it 100% stock and drive the tits off it. Then go with an s252 or s256 and an hhr f23 4.17fd trans. It will be a totally different animal without being too much to be functional.

Just keep looking I picked up two SC in one week. One was a total roll over and the other was a driver Both rough but the price was right.
The roll over was only good for the motor, trans and wiring. Sub frame was damaged and all the front suspenion was broke so I bought al new parts so not dealing with old worn out stuff. Which I would have don anyways.

Look at every Cobalt post you see, especially if it looks like an SS but isn't labeled as such. Mine was listed on FB marketplace as an SS, but it said it was an automatic and was missing a few other details (it was a legit 07 SS/SC manual). The guy who had it was a flipper who bought auction cars and flipped them to sell, but he couldn't since the SS was a salvage title from an accident that tweaked the unibody parts. He had it priced way high, and I basically offered him what would have been the cost to buy it from auction all fees included, and he was happy to do that since he wanted to just make back his money.

Also, on the subject of power: 340 horsepower will put you in the same level of power to weight ratio class as a 600+ horsepower supercar. Building a Goblin with that much power out of the gate seems terrifying. My thought process was to build the kit with the stock motor and get my sea legs on it, then maybe build up the power. But I would be lying if that unholy supercharger whine isn't something special to keep, just for the sound alone.
Last edited: May 5, 2021
F

Any major concerns with this damage? 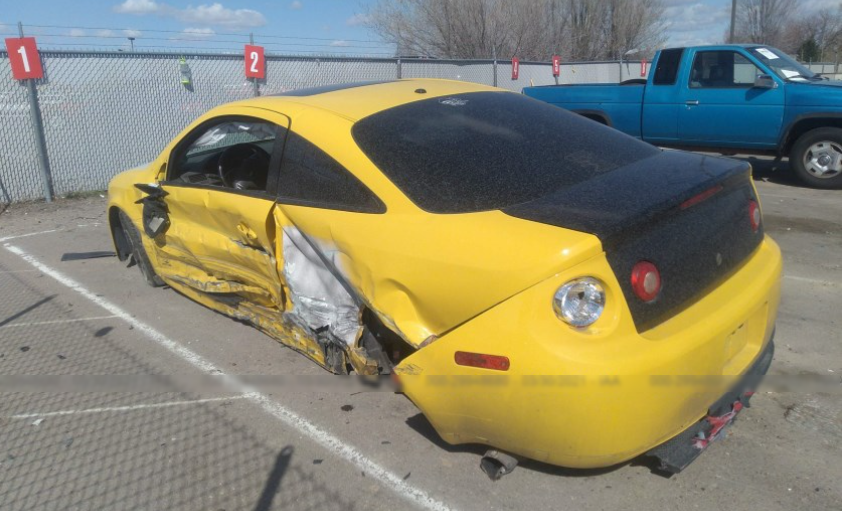 I'll be going with aftermarket suspension and bearing hubs aren't hard to come by.

Check out the engine... that damage is not an issue for a donor.

That one.looks like a good candidate if the drivetrain is still in decent shape. How many miles? What year and model?
F

I would suspect those miles aren't an issue if the owner didn't abuse it (not counting hitting something and shearing off a wheel). My donor is also an 07 SS/SC, with mid 180k on it. Seems to have been maintained well, and is very strong. Tearing it down shows it held up extremely well for those miles.
R

Worst case scenario there you're looking at replacing a subframe, oil pan, and possibly a transmission depending on what the driver's side axle did when the wheel/knuckle vanished. The subframe and oil pan are standard Cobalt parts, though, so not hard to replace. The SS/SC F35 trans is not as "dime a dozen" as the base model F23, but the F23 can be installed on any Cobalt motor with a bit of parts planning. But if the car's not leaking fluids then the oil pan and trans are probably fine.

It's also probably missing a little bit of hardware that gets reused on the Cobalt front/Goblin rear suspension, but I suspect most Goblin builders end up with a little bit of experiencing in sourcing some harder-to-find not-so-standard hardware. I went to a junkyard to grab a single hub-to-knuckle bolt, for example.
You must log in or register to reply here.
Share:
Facebook Twitter Reddit Pinterest Tumblr WhatsApp Email Link
Top