Hey guys, finally finished the goblin but having an issue with no cranking.

What I know:
Grounds are good, I checked resistance to all grounds and ground points I could get to easily from the battery, Every thing read 1.5 or under.

Gauges all work as expected except I do have a code for high fuel sensor voltage.

Blinkers horn and accessory buttons and all that all work as expected.

Powers on, when turning key to crank I get nothing except the lights dim slightly

Starter signal wire does not receive 12v as it's suppose to, if I jump 12v from the battery directly to the signal terminal it cranks instantly.

I'm assuming this is a sensor issue, I tried jumping each clutch switch individually and together to no avail.

I have power through the crank 30a fuse and up to the crank relay in the fuse box, but it never goes from there to the purple signal wire.

I found a website which listed voltages and stuff to check for starter, and I checked it all, as I said above signal wire has no 12v, fuses for it are good, and relay is good, I tried swapping anyway to be sure, no change.

1)purple wire on the starter has 12v when trying to start the car(feeds the selinoid from the crank relay)crank fuse 30 amps under hood fuse box
No power here.

2)Power passing through the clutch switch,yellow and pink wires should have power on both sides to ground
When cluth is depressed.(circut is fed by the fuse 16 on the bcm hvac/ip ign)no power check fuse
Fuse here good, pink has 12v when grounded, yellow does not have 12v when grounded.


4) Also there are two others fuses worth checking under the hood (they are labeled bcm 3-30 amps and bcm 4 -40 amps they feed the starting circut as well.
Both of these were good

5) For the switch itself:
There are five wires
(Terminal number in brackets) example (6).

White/black (6) 5 volt dc part of the theft deterrent
4.85v
Red/white (2) 12volts dc fed from the bcm ign/SW fuse(for actually turning on the crank relay when you try to start the car)
12.8v
White wire (5) looks like 5 volts passes through the switch to the bcm when car is started (Not sure on this one)
4.6v
Yellow (3) 12 volts dc fed from the switch back to the bcm from the switch to the crank relay when car is started(should read 12vdc here I would think when trying to start the car)
12.8v
Brown (4) 12 volts dc ,Feds the theft deterrent modul and the ignition lock selinoid .
12.8v aswell.


So all I see is that the yellow wire on the clutch switch has no 12v? Could that be my reason? Anyone have anything else I should check?

So you can hot wire the starter, and it cranks... if the key is on, will it start the engine?
I have to start my car this way sometimes. I think it is an issue with the GM low speed LAN. Still working on this.
P

Ross said:
So you can hot wire the starter, and it cranks... if the key is on, will it start the engine?
I have to start my car this way sometimes. I think it is an issue with the GM low speed LAN. Still working on this.
Click to expand...

I don't have fuel lines hooked up yet, So I cant see if it'll run just yet, soon as my line comes here I'll be able to fill the tank and see if it'll start and run.

But yeah I can jump it manually or through the crank relay jumping the diagonal pins, or the one pin right to the positive post, all spins starter.

From what I was reading, my clutch switch isn't working properly, even with the clutch switch jumped, was really hoping someone had a definitive check this check that

It's possible it could be the same thing mine was, a bent pin in the engine harness fuse box connector, inside the fuse box. Mine happened to be a ground pin.

Did you make sure to ground the headlamp connector under the fuse box? It provides grounds for some of the fuse box circuits. I'll see if I can find a photo of it.

ctuinstra said:
Did you make sure to ground the headlamp connector under the fuse box? It provides grounds for some of the fuse box circuits. I'll see if I can find a photo of it.
Click to expand... 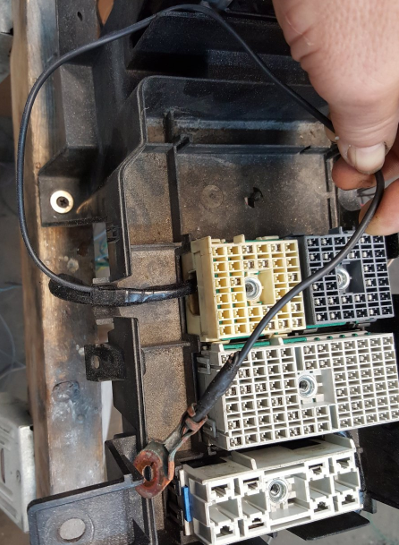 Ark, My build log was mostly done on facebook, I purchased the partial kit from swift06 a few months ago so alot of the build was done already. I'll eventually transfer the pics and stuff over to a thread here.

I do indeed have that wire grounded, I extended it about a foot and have all my grounds in roughly the same area. By the left side of the gas tank.

I'll pull apart the box again tomorrow after work and check all the pins.

If I could bypass the clutch and brake pedal sensors all together I would honestly. My previous two toys had clutches without sensors so it wouldn't change much for my use. Though, I guess that's essentially what I was doing by jumping the crank relay earlier wasn't it.
P

I found a post on another forum that said one of the relay pins is grounded until clutch pedal is pressed, then it sends power, so I'll check that tomorrow, if that ground changes to power on press of the clutch I'll know if it's that wiring on that switch or not

The clutch switch is used not only as a safety system when starting but also when using cruse control to keep the engine from revving out of control when the clutch is pushed in.
P

ctuinstra said:
The clutch switch is used not only as a safety system when starting but also when using cruse control to keep the engine from revving out of control when the clutch is pushed in.
Click to expand...

True, I didn't think of cruise, ok so I definitely have to figure it out, I can get into the computer to read codes and whatnot, I just don't get the crank signal, as Far as I know, the only conditions are the pedal safety neutral safety switch off top of the trans, and the ignition stuff. From what I can see on the schematics looks like yellow from clutch switch and yellow from neutral safety switch are tied together somewhere under the fuse box? I don't actually remember from doing my wire harness.

Oh right, I forgot you were the guy who picked up swift06's stuff.
P

Yeah, he had quite a bit done that was later in the process so I had to peel back layers and redo stuff alot. But I got it essentially done now.

Benefit was I already had a stripped donor when I got his stuff, so now I have two of everything. Knowing what I know now I have an already done wiring harness I plan to redo and move my entire fuse box behind the driver seat, that will give me a ton of room back in the engine area. But that's all after I get it running first. Just gotta sort out this no power to the signal wire thing. The fuse box becomes surprisingly small when u trim all the extra plastic off it.
P

Can someone with a running car check, with your key on but not running does the clutch sensor wire have power at both the pink and yellow wires? Or is the pink powered and yellow not powered?

Edit, one wire should be powered and the other not, I misread, so the second wire I have to trace and find out why no signal. One of the relay pins should supposedly switch from grounded to powered when the clutch is pressed. I'll work on that tonight with a test light.

I'd check for you, but I have a late-model donor. You'll need someone with a SS/SC donor for this one.

The yellow doesn't have power when the key is on. The pink does.
P

Ross said:
The yellow doesn't have power when the key is on. The pink does.
Click to expand...

Yeah I misread the stuff above it said both powered when clutch depressed, totally glossed over that first time, so I'll check that tonight,I gotta find if the yellow goes back to the BCM, or if it goes directly back to the fuse box itself. 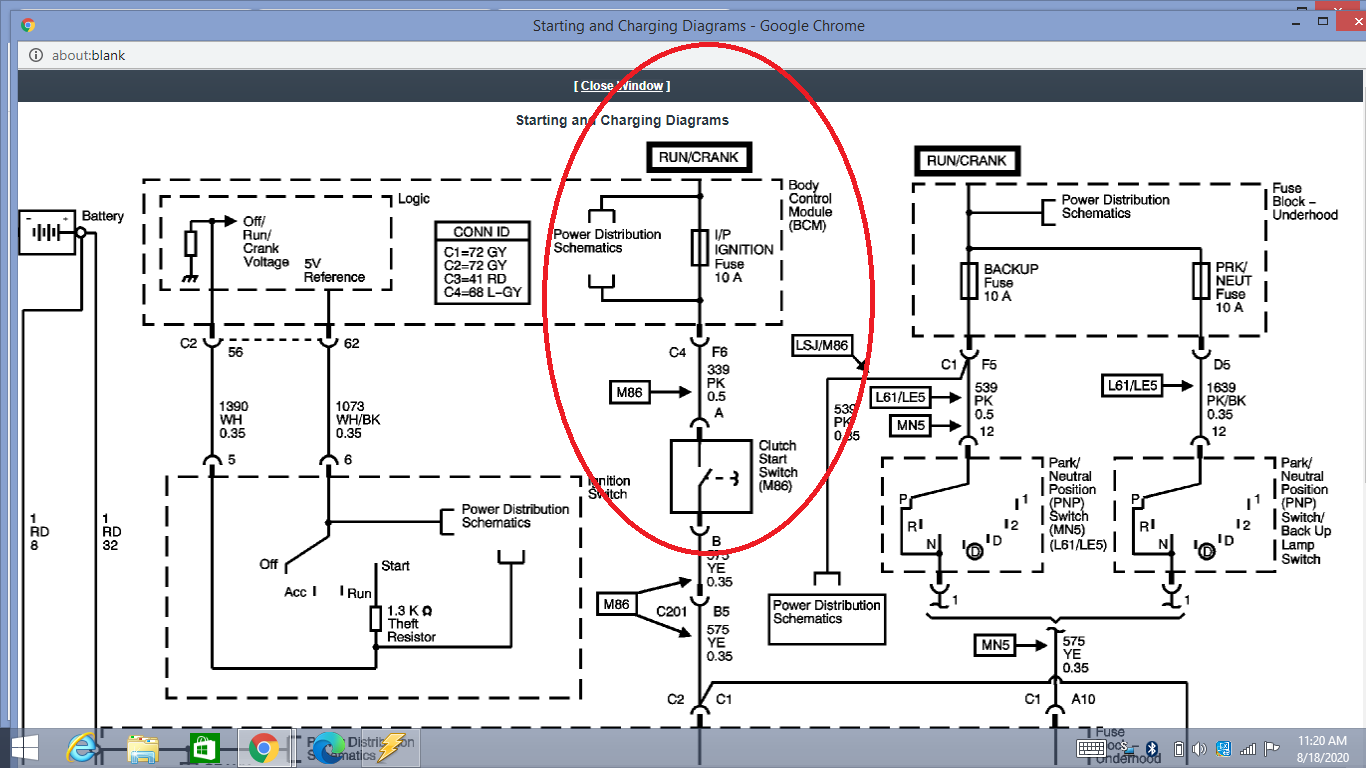 The yellow goes to the fuse box Crank Relay, and the PCM. 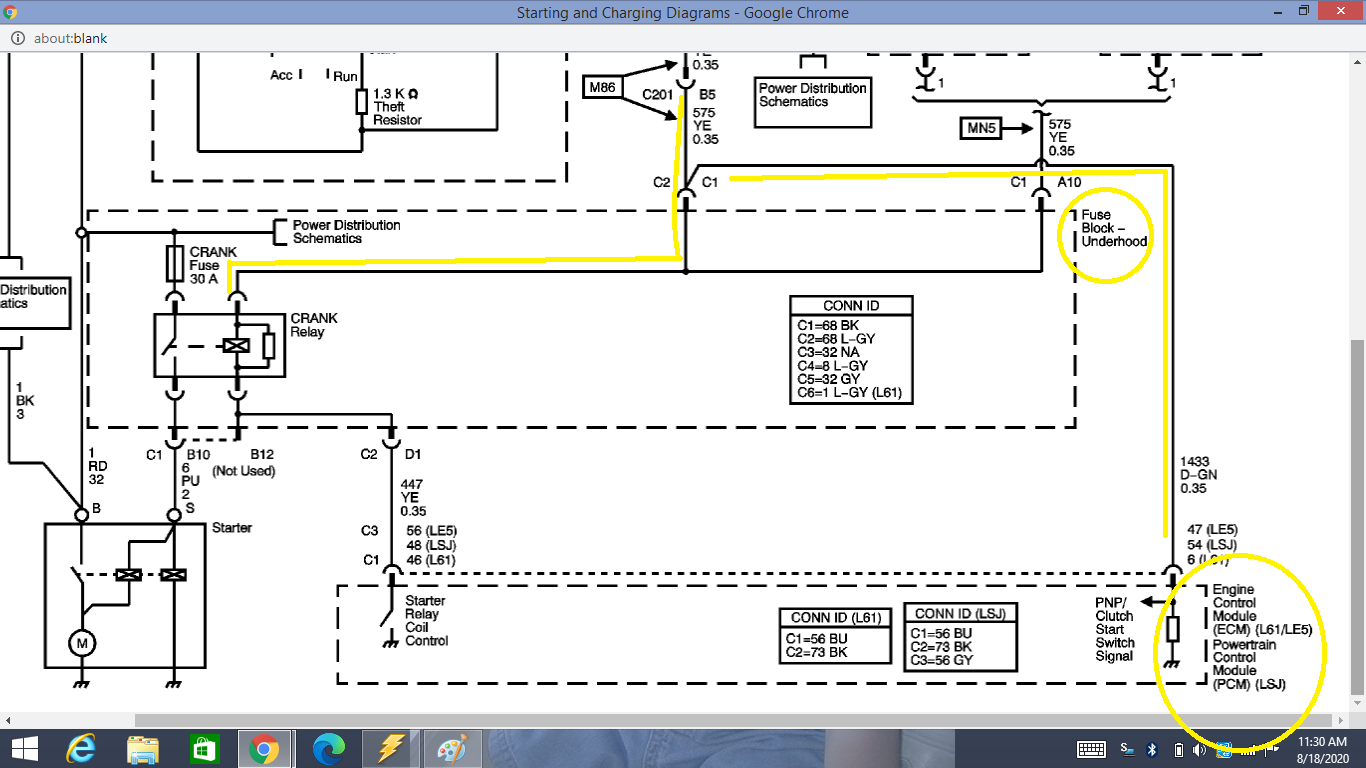