Brian74 said:
I put a deep scratch in a gauge cluster removing a dash years ago, when I worked at a dealership. That stuff took the scratch completely out. Works amazing.
Click to expand...

So this Novus stuff is safe for the DF windshield? I'd like to try to eliminate the scratch my wife gifted upon my Goblin so generously.

Ark :D said:
So this Novus stuff is safe for the DF windshield? I'd like to try to eliminate the scratch my wife gifted upon my Goblin so generously.
Click to expand...

Not so much an “Is it safe” thing. Its whether it will work. Its not gonna make things worse.

Depends on whether the windshield is lexan, acrylic (plexiglass) or polycarbonate. I’m not sure what it is made from myself.

One of those three (polycarbonate, I think) is **** near impossible to remove scratches and hazing from.

According to DF's site, the windshield is polycarbonate, so I guess I will stop thinking about it.

Ark :D said:
According to DF's site, the windshield is polycarbonate, so I guess I will stop thinking about it.
Click to expand...

I don’t have any but I’ll see if my dad does tomorrow. If so I’ll put a good scratch in mine where I’m going to cut it out in the middle. I’m sure I’ll be able to buff it out.

How bad is the scratch?

Ark :D said:
According to DF's site, the windshield is polycarbonate, so I guess I will stop thinking about it.
Click to expand...

There are also different grades of lexan & acrylic; kind of like metals. Its certainly worth a try.

I just remember trying everything I could think of to clear up an old boat windshield once. Nothing worked, lol.

It's not deep ... it's also not a straight line, it's more of a "scuff patch" than an actual scratch, I guess. My hood (with windshield attached) is propped against the wall of my garage, where she typically has no business going (I don't mean that to sound rude, just saying, there's nothing there for her on that side of the garage and thus she never goes over there), and it's covered in multiple blankets, including over the windshield which is about 1" off the garage floor. I tucked half of the blanket under the windshield, and wrapped the other half over the top of it.

Well, she took our deck furniture inside due to an impending snow storm, and decided to use the free spot in the garage to store it. Not only did she plop the leg of one of the chairs down on top of the windshield, she even removed the blanket first to use it to cover the chairs, thinking it was an extra. I do not know how she didn't notice the shiny windshield reflecting light back at her or whatever, but it is what it is.

I was mad as a hornet at first, but at the end of the day, I only blame myself for putting the windshield in a situation where it could be scratched.

Also, there is an abrasive out there called micromesh that works super well for detail work and polishing. Popular with modelers. I have had some pretty amazing results using it in various small detail applications.

Ark :D said:
So this Novus stuff is safe for the DF windshield? I'd like to try to eliminate the scratch my wife gifted upon my Goblin so generously.
Click to expand...

I use novus 2 and novus 1. It works well. If you have a deep scratch, it will take a lot of elbow grease. I was told not to use novus 3 because it would cause scratches instead of fixing them.

My neighbor runs a big local tint shop, he said the best way to protect polycarbonate is by covering both sides with clear bra. He said it will still scratch a bit, but when it warms up in direct sunlight the scratches disappear.

Another off topic side note, you can get an extra sheet of polycarbonate from Home Depot for about $80 that would be enough to cut out 2 new windshields. Just use the scratched up df one as a template.

There is always this option

Update guys. I received an old scratched up piece of polycarbonate from Dale E. The idea was to do some testing to see what worked best to clear these windshields up. My first try was to use a heat gun like a few videos I had seen online. Big mistake!! It didn't clear up anything, but it warped the poly and caused micro bubbles inside. Dont try it. I then bought a bottle of Novus 3 and a 3" pneumatic buffer from harbor freight. Right on the back of the Novus 3 bottle it says do not use on polycarbonate. I had really good results! Novus 3 did a good job of removing the heavier scratches. It did leave the windshield "hazy". Then I hit it with the Novus 2. This removed the "hazy" micro scratches. Then I followed up with Novus 1 with a microfiber towel. So recap... I went over both sides of the windshield twice with Novus 3 and the buffer, then twice with the Novus 2 and the buffer, followed by Novus 1 with the microfiber towel. Here is an example of a 3" area I tried on Dale E's old windshield. 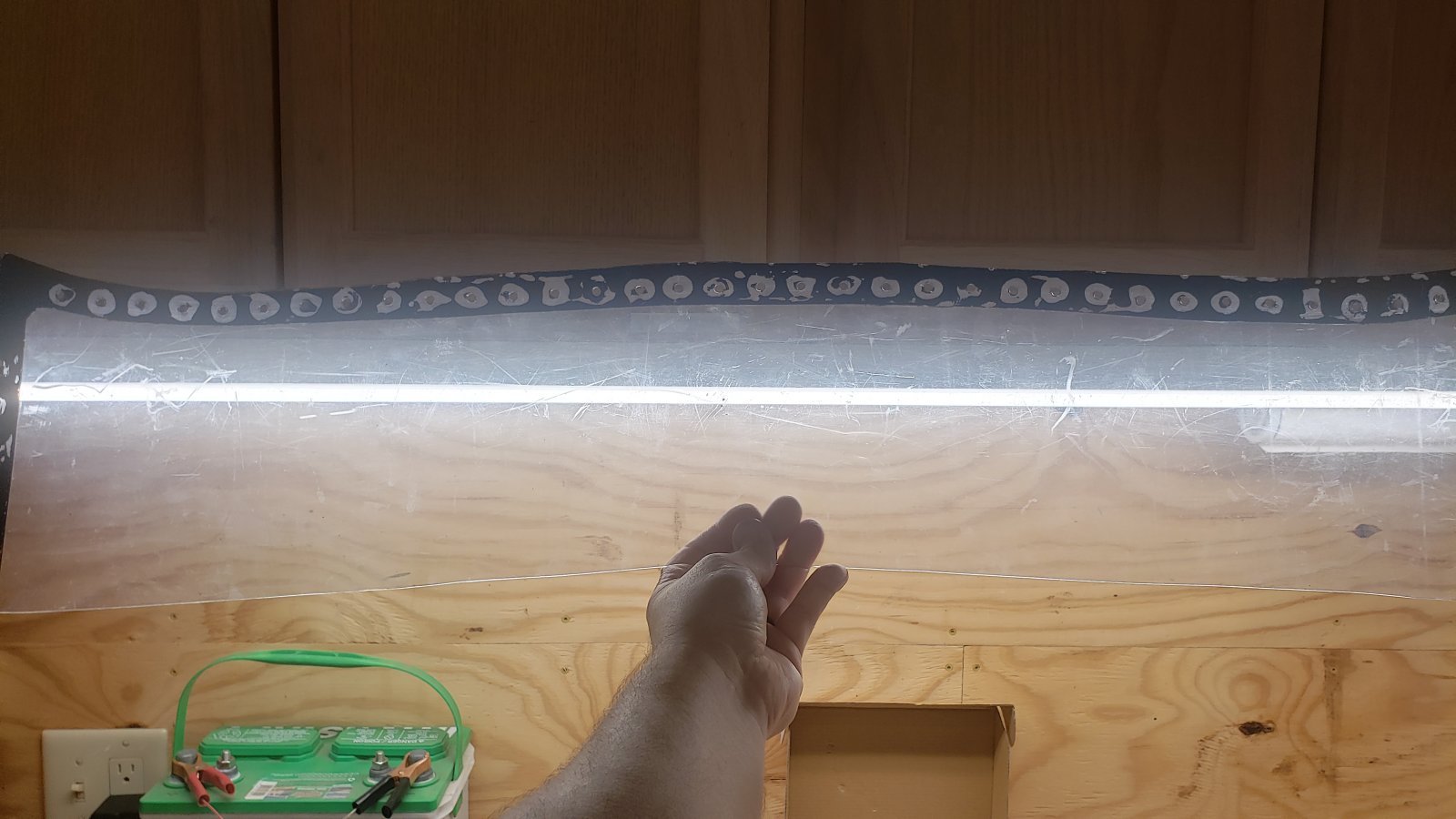 Give it a try.

Great job fixing that windshield. 3” pneumatic buffers are awesome! What kind of pad did you use on the buffer?

Grab a 3” DA sander and you can do miracles with old headlights and scratches in paint too.

I used the foam pads that came with the buffer. The orange pad for the Novus 3 and the white pad for the 2. I applied the Novus to the pad with a couple drops. Then dotted the area I was going to buff with the pad. I buffed till the polish was "dry", then polished the dry off with a microfiber towel by hand. I worked in small 12" areas. 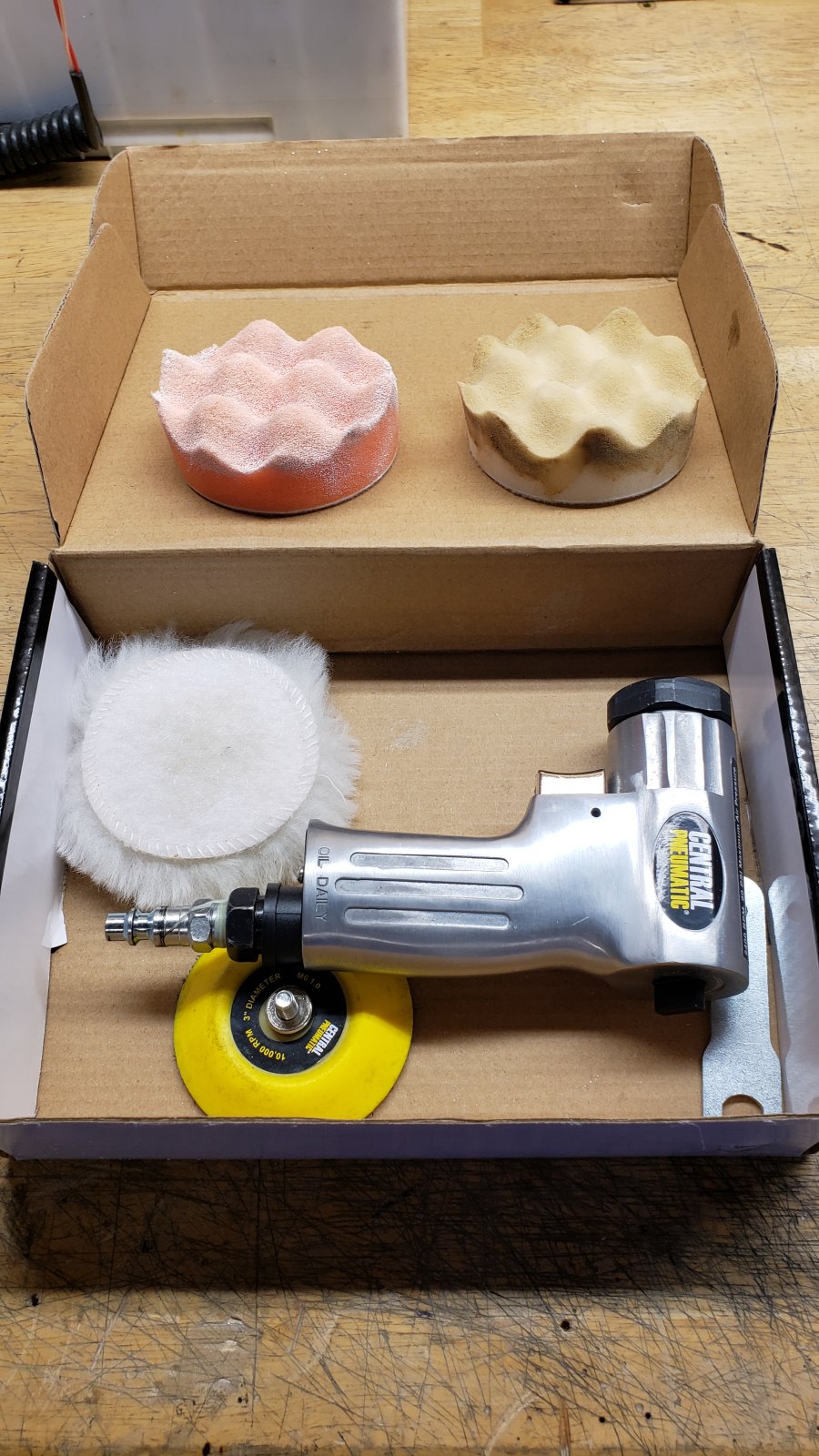